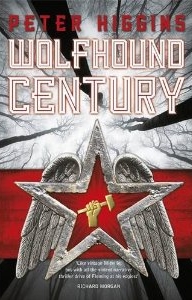 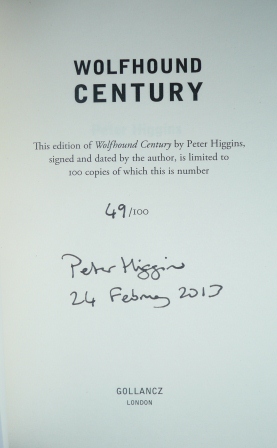 A breathtaking Gollancz fantasy debut. First book in a projected trilogy which is expected by many to be the fantasy debut of the year!

This is one of the numbered first edition hardbacks, signed, pre-publication dated (24th February 2013) and numbered out of 100 copies by author to a pre-title limitation page. It is new in fine unread condition.

Please note that the photo of the limitation page is for illustration purposes only. The number you receive will differ to that shown.

What some have been saying about Wolfhound Century

"Sentient water, censored artists, mechanical constructs, old-fashioned detective work, and the secret police are all woven together in this rich and fascinating tapestry." —Publishers Weekly

"An amazing, fast-paced story in a fantasy world poised dangerously on the edge of quantum probability, a world where angels war with reality" —Peter F. Hamilton

"I absolutely loved WOLFHOUND CENTURY. Higgins's world is a truly original creation, Russian cosmism and Slavic mythology filtered through steampunk and le Carre. What really captured me was his beautiful style and language: his metaphors and associations flow smoothly like the waters of the Mir, and, like Lom without his angel stone, make you see the world in a new way." —Hannu Rajaniemi

"Like vintage Mieville or Vandermeer, but with all the violent narrative thriller drive of Fleming at his edgiest. I fell into Wolfhound Century and devoured it in three days flat.Peter Higgins is a great discovery, a gifted writer with a route map to some fascinating new dark corners of the imagination, and a fine addition to the contemporary fantasy canon." —Richard Morgan